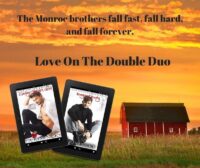 Twin brothers find love in the most unique ways in this fabulous duo!

First, meet AJ… Until AJ Monroe left Indiana after college he had always lived in his identical twin brother’s shadow. He had made a life for himself in Denver, Colorado, away from Jessie, away from Indiana. But when AJ feared for his brother’s safety, he left everything behind to step back into the shadow he thought he had outgrown. Finding his brother was AJ’s only concern…until he met Jessie’s girl.

Fiercely independent, Rina Abbot hid her true situation from everyone, including her best friend, Jessie. Out of money and unable to care for her rescue dogs she had no choice but to accept the help of the handsome stranger with a familiar face. Afraid to trust him, she tried to ignore the feelings he stirred within her as they searched for his missing brother.

Finally open about their feelings for each other, Rina’s secrets began to wreak havoc on their lives. Would Rina’s secrets force AJ to give up his dream of loving Jessie’s girl?

Follow that with Jessie… After serving in the Marine Corps, Jessie Monroe has finally found a life beyond war. He’s focused on being an EMT and helping his best friend rescue dogs, until he happens upon a curvy blonde stranded with a flat tire and no jack.

On the run from her past, Dori Graham is slow to trust any man, and she tries to ignore the spark of interest she feels for her handsome savior, but a friendship grows between them.

When Dori’s past invades her new life, Jessie vows to rescue her. Saving her will take him beyond duty and into his own personal hell. Calling upon his training as a Marine and the depth of his feelings for Dori, Jessie will need the mental strength to battle to save her and, ultimately, save himself.