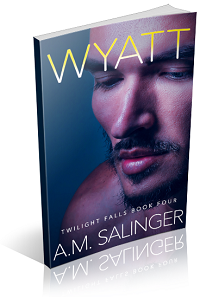 Wyatt Batista has sworn off love. Can his new friend and business partner make him believe in happy-ever-after?

Having spent most of his adult life lusting after a man who could never be his, Wyatt Batista resolves to steer clear of love. That’s all fine and dandy, until he meets Nathan.

After an accident sends his carefully planned future off course, Nathan Hardy leaves Seattle in search of new horizons and adventures. When his path crosses that of Wyatt, he enters into a business partnership with a man he comes to admire and respect deeply.

But what starts out as friendship soon turns into something neither of them expected. For Wyatt finds himself falling hard for someone who he believes could never return his love once more, while Nathan becomes aware of feelings he never imagined he would harbor toward another man.

Can Nathan convince Wyatt that he is serious about giving their relationship a try? Or will Wyatt run again, fearful to trust and accept a man who wasn’t gay in the first place?

Join Wyatt and Nathan in this delightful fourth installment in Twilight Falls, the new series by the author of the bestselling, contemporary romance series Nights.